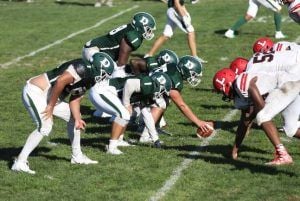 Deerfield’s defense kept Lawrenceville out of the end zone with strong tackling, tenacious effort to the ball and tight coverage. Donnie Gray ‘21 and Tommy Stull ‘21 both had interceptions for the Big Green and Gray returned his interception for a touchdown in the first quarter. Seniors Max Stevens ‘20, Luke Terry ’20, and Marcus Romboli ’20 led the way and set the tone for the defense. The Big Green defense was able to force many three and outs for the Big Red offense.

On the offensive side of the ball, Deerfield was led by quarterback Cortland Dicks ’21 who went six of ten for 135 yards and two touchdowns. Deerfield put the pressure on from the opening drive with Griffin Schutz ’21 bursting through the line for a 35 yard touchdown run. The offensive line of Romboli ’20, Lochiatto ’22, Savage ’20, Stadtler ’20 and Muhktar ‘20 did a great job of opening holes for running backs Schutz ’21 and Philie ’20. Donnie Gray also paced the offensive attack with two receiving touchdowns.

This Saturday, the Big Green will travel to Suffield to battle the Tigers in a big early season test scheduled to kick-off at 3:00pm. Tune in to watch Saturday’s game on the Suffield livestream by clicking here.