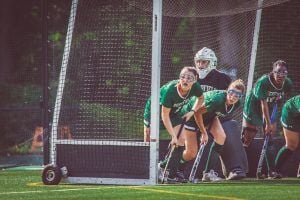 On Saturday, varsity field hockey shutout Berkshire School on the road for their first victory in their 2019 season opening game.

After a couple of weeks of drills, situational plays, and a handful of scrimmages, the girls’ excitement and anticipation was high to begin their 2019 campaign.

Deerfield scored early in the first half when Christina Halloran ’20 fired one in from the top of the circle.  Sydney Cresta ’20 capitalized on a pass from Maddie Zavalick ’22 and increased the lead to 2 – 0 before the first half was over.  While the skies opened up during the second half, the girls did not seem to notice.  Hannah Roche ’21 and Reagan Hickey ’20 added two more goals to the Big Green’s tally.  Lily Steinwold ’20 recorded a shut-out in goal and the final score remained 4 – 0 at the end of the game.

Next up, the team travels to Pomfret today to battle the Griffins.