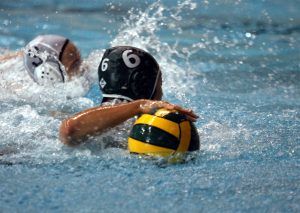 The boys varsity water polo team earned their first win of the 2019 season on Saturday vs. visiting Westminster.

The Big Green opened the game’s scoring in the first quarter,  pulling ahead to an early 2-0 lead over the visiting Martlets. In the second quarter, the Green & White extended their lead by netting another five goals, while only conceding a lone goal in the first half. Entering halftime, the Big Green held the lead 7-1.

In the second half, the Doors continued their offensive dominance, adding another four goals to their tally and added their final goal of the game in the fourth quarter. At the final whistle, the Big Green were victorious 12-4.

Next up, the Big Green will welcome the Suffield Tigers to Koch Natatorium on Wednesday, September 25 for a 3:00pm contest. Tune in to watch tomorrow’s livestream of the game, by clicking here.