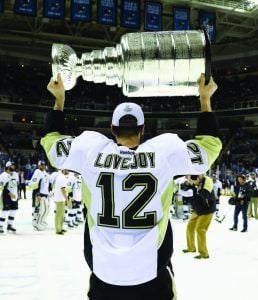 San Jose, CA - June 12: Ben Lovejoy #12 of the Pittsburg Penguins celebrates with the Stanley Cup after their 3-1 victory to win the Stanley Cup against the San Jose Sharks in Game Six of the 2016 NHL Stanley Cup Final at SAP Center on June 12, 2016 in San Jose, California. (Photo by Bruce Bennett/Getty Images)

In August, in his first appearance as an analyst on the NHL network, Ben Lovejoy ‘03 took the opportunity to announce his retirement from the NHL after 11 seasons.

“Playing in the NHL was a lifelong dream come true. I spent 24 years of my life trying to get to the NHL and then 11 trying to stay. I’m so lucky with how everything turned out,” Lovejoy said in a statement made to NHL.com.

Lovejoy started his professional career in the AHL (American Hockey League) with the Norfolk Admirals, before making the jump to the NHL. He enjoyed a successful career, with two stints with the Pittsburgh Penguins, where he won a Stanley Cup and played with the New Jersey Devils, Dallas Stars, and Anaheim Ducks. He finished his career with the Stars, and helped Dallas reach the second round before hanging up his skates. In 11 years, he played 544 games, tallying 20 goals and 81 assists for 101 career points.

Notably, Lovejoy was the first active player in the NHL to elect to donate his brain to the Concussion Legacy Foundation to support Chronic Traumatic Encephalopathy (CTE) and concussion research. After his announcement in 2017, several other high profile athletes, both men and women, have followed suit. Of donating his brain, Lovejoy said to NBC Sports,

I hope I live until I’m 90-plus years old and concussion issues and CTE are cured long before my brain is looked at by the doctors. I am lucky. I have had very little head trauma throughout my career.  But I have had teammates, both high profile stars and minor role players, who have struggled with concussions. By pledging to donate my brain, I hope it helps the team at Concussion Legacy Foundation and their collaborators at Boston University and the VA continue their work to cure concussions and CTE.

Prior to his NHL career, Lovejoy spent a year at Boston College before transferring to Dartmouth College. In three seasons at Dartmouth, he scored 11 goals and 46 assists in 96 career games, and won an ECAC Championship in 2006 and earned a berth to the All-ECAC Hockey Team. He credits Dartmouth for giving him a new lease on his hockey career.

Lovejoy is the first Deerfield alumni to have his name inscribed on the Stanley Cup. While at Deerfield, it was clear that he had a bright hockey future. While donning the Deerfield Green and White, he earned All-League and All-New England honors in hockey, but was also a threat as a soccer and lacrosse player. He was a standout three sport athlete, earning All-League and All-New England honors in soccer, and was an All-American in lacrosse. Given his passion for sports and especially for hockey, there is no doubt he will excel in his transition into his new role as an NHL analyst on the NHL Network.

Congratulations on an amazing career and best of luck with your future endeavors, Ben!