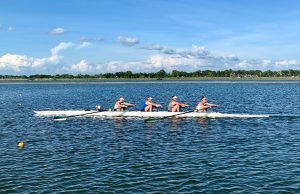 The Deerfield girls rowing team concluded their 2019 season on Sunday, June 9 at the 2019 US Rowing Youth National Championships with a second place finish in the girls 4+ division C Final.

In the opening time trial race on Thursday, June 6, the Big Green lined up against 25 other crews, with only the top-nine finishing boats automatically qualifying for the AB semifinals. At the finish line in the time trial, the Deerfield girls 1V crew including teammates; Morgane Dackiw ‘19, Melissa Mitrovic ’19, Kikka Giudici ’20, Bailyn Prichett ’19, and Jerilyn Zheng ’19 were the 18th boat to cross.

The Big Green crew was back in the water on Friday, June 7 for the third heat of the Repechage race with the hope of finishing first in their heat to earn their way into the A Final championship race. The Doors held the advantage in the race through the first 1500 meters, but were overcome by Montclair in the final 500 meters of the race, finishing in second place with a time of 7:26.974.

With the second place finish in the Repechage, the Big Green earned their place in the six boat C Final race. The start line included boats from B-CC, Milwaukee, Saratoga, Whitemarsh and Austin.

In the C Final, the Big Green took the lead in the race from the opening strokes and opened their lead on the field through the first 1000 meters. In the second half of the race, the Big Green continued to lead the way, with a three boat race emerging between Deerfield, B-CC and Milwaukee.

The B-CC boat increased their stroke speed in the final hundred meters of the race, edging the Big Green boat slightly at the finish line. Ultimately, Deerfield finished in second place in the C Final to finish as the 14th ranked team in the women’s youth 4+ division in the country.

Additionally, the Big Green 1V boat ended the regular season winning three of their four races and went on to capture the silver medal at the New England Interscholastic Rowing Championships on Saturday, May 25.

Congratulations to the girls rowing team and coaches on a great 2019 season!