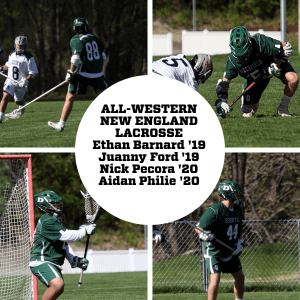 Ethan Barnard, a senior face-off specialist for the Big Green, helped the team secure pivotal possessions throughout the 2019 season. Next year, Ethan will continue his lacrosse career at the collegiate level where he will suit up for Bowdoin College.

Juanny Ford, a post-graduate student-athlete from California played long stick midfield in his lone campaign for the Big Green. In November, Juanny signed his National Letter of Intent to play lacrosse at the University of Notre Dame next year.

As a junior, Nick Pecora started every game in goal for the Big Green. He secured a shutout this season against NMH and helped guide the Big Green defense, who averaged only 3.2 goals against in their final five games of the season.

Aidan Philie, a junior defender in his second season with the Big Green helped anchor the team’s defense with his consistent effort and efficient defensive presence.

This season, the boys varsity lacrosse team posted a 14-3 overall record, which included a shutout win over NMH and ten wins where the team scored ten or more goals in the victory.

Congratulations to the 2019 Deerfield boys lacrosse All-League honorees and the boys varsity lacrosse team on their season!