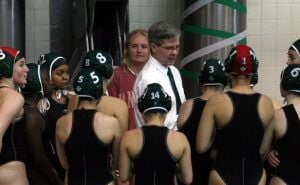 On Saturday in their final regular reason contests, the Big Green girls varsity water polo team defeated visiting Hopkins and Andover to close out their 2019 campaign on a three-game winning streak.

The Big Green earned a come from behind victory over Hopkins for their first of the day on Saturday, May 11. Hopkins jump ahead to a 2-0 lead in the first quarter. By half-time the Big Green cut their lead in half by netting their first goal of the game in the second quarter and opening the door for more scoring in the second half. The Big Green won the third and fourth quarters, 3-0 and 3-1 respectively. At the final whistle, the score was 7-3 in favor of the Big Green.

In the game, the Big Green jumped ahead to a 4-2 lead in the first quarter and furthered their lead in the second, entering halftime up 10-4. The offense continued to lead the way through the third period by adding five more goals and added their final goal of the contest in the fourth quarter to seal the victory, 16-5.

Sydney Bluestein and Amanda Brooks each registered single digit save numbers in the win.

Earlier in the week, the Big Green kicked off their winning streak by defeating the visiting Suffield Tigers, 15-8 on Wednesday, May 8. Maddie Clough led the team’s scoring with six goals, Nikki Pelletier added three goals, Darcy del Real found the back of the net twice and Morgan Clough, Sophie Opler, and Orlee Marini-Rapaport each scored a goal in the victory.

In their three final home games of the 2019 season, the Big Green outscored their visiting opponents 38-16 helping them to close out 2019 on a three-game winning streak.

Congratulations to the girls varsity water polo team on their 2019 season!