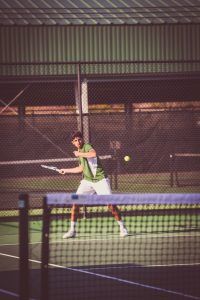 On Wednesday, Deerfield boys varsity tennis defeated Hotchkiss 5-2 to earn their fifth consecutive win and extend their longest winning streak of the 2019 season.

On the road at Hotchkiss, the boys varsity tennis team was strong in singles play and dropped the doubles point for only the second time this season. While every court battled to a score of 8-6, only the #2 team of Sarachek/Yao were able to pull out the win. With the victory, Sarachek/Yao improved to 9-1 on the season.

Starting singles down 0-1 after doubles, the boys battled to earn wins on 5 of the 6 courts. Senior captain Alfi Auersperg played one of the best matches of his career to defeat Cole Maura at #1 6-4, 6-3. Deepak Pathapati won easily on the #2 court against Clay Glovier 6-3, 6-0. At #3, Achille Sarachek’s forehands were too much for Jerry Qiao as he won 6-3, 6-4.

With Wednesday’s win, the Big Green’s season record improves to 9-2. Deerfield will return to action tomorrow, May 11 against Exeter at home at 2pm with the support of many families during Family Weekend.