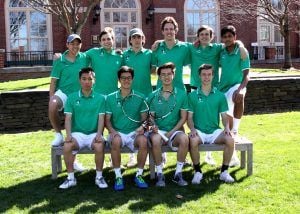 The Deerfield boys varsity tennis team concluded their 2019 regular season schedule of matches on Wednesday; posting an overall regular season record of 10-3. As a result of their winning record the team was one of eight Class A teams selected to the 2019 NEPSAC Boys Tennis Class A Championship Tournament.

Tournament play will begin  on Saturday, May 18 when the Big Green faces off against Brunswick in Wallingford, CT in the opening quarterfinal game at 9:00am. The other three quarterfinal games include match-ups between Cheshire and Choate, Andover and Hotchkiss and finally, Avon and Groton.

The winners of the quarterfinal matches will advance to the semifinals to be played later on Saturday, May 18. If the Big Green advance, they will play the winner of the Cheshire vs. Choate quarterfinal.

The semifinal match winners will go head-to-head in the championship match on Sunday, May 19 at Groton.

Congratulations to the boys varsity tennis team on qualifying for the 2019 NEPSAC Championship Tournament! Good luck!