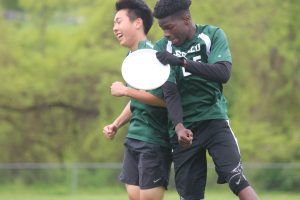 On Saturday, April 13, Northfield Mount Herman hosted its 21st annual Ultimate tournament, and the Deerfield team took first place in our division with a 4-0 run and a combined goals record of 46-9.  Apart from moderate wind gusts during our final game, we had a beautiful play day: overcast and calm in the morning, and mixed clouds and sun in the afternoon.  The fourteen players who attended the tournament, representing all current class years, played roughly equal time on the field.  Our level of sportsmanship was such that the Longmeadow team we played awarded us its sportsmanship prize.

Shout outs from the players included the following: Raheme Taylor and Abdiel Torres were great on defense.  Adam Sussbauer played amazing offense, with multiple bids and catches deep, despite having an injured finger.  Our two main types of defenses were strong, and by maintaining our focus and positivity, we stifled many offenses.  Sam Laur had the highest number of defensive blocks, and Maya Laur had a great tournament defensively, creating lots of disruptions as the mark.  Luis Rodriguez threw an amazing hammer to Adam, and Adam caught it in the end zone.  Alex Yuk and Shane McCarthy had really good dump swings, and Tyler Kelly was downright unstoppable, outplaying his opponents by virtue of his killer jumps.  Maddie Beaubien played it cool, Juliette Lowe was fast as a rocket, and Gerald Xu and Alex Bautista were in the zone, playing at their best even when we were all getting tired.  Lots of positive communication on and off the field, with overall good vibes and a growing, loyal fan base!​