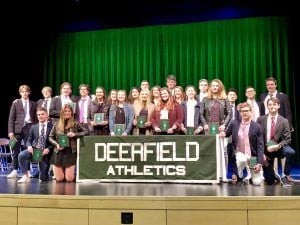 Yesterday the Deerfield community gathered at School Meeting to recognize the winter 2018-2019 teams, student-athletes, coaches and support staff for their season achievements.

The 2018 -2019 winter season was a remarkable time for our students, teams, and Deerfield Athletics. Some of the winter team highlights include:

All through the fall we waited for the construction to end.

So much planning and waiting, our nerves could now start to mend.

Would we have a good winter? Would the teams do as well as they should?

As we started the month of December you could just feel that we would.

Right from day one our JV and thirds teams had come to play.

What more could we ask for from seniors like Jeff So, Alexia Baker, Nicole DaCosta, Colin Olson, Stephen Li, Juliet Perry, and dozens more – you could have done less but decided on more again.

To all of you a big thanks and a place in the Top Ten.

Next up, I have to give a nod to Jade and the Jacksons for their grit and determination this year.

Every game they played in could have been theirs – the home cheers combined with their grit always kept their team near.

At the 8th spot comes another group we can all feel really good about!

It’s our wrestlers – help me give them a big shout!

Daily, I watch this group practice before or after I head off to the ice.

They work hard to get better and together they define grit and sacrifice.

Congrats to Chris Thagard, John Chung and Angela Osei-Ampadu for their leadership with this team on the rise.

Angela will be the first female co-captain elect ever to help lead this team with both girls and guys.

At #7, I’d like all those all-star select members to please stand.

This list I’ll show you will help if you didn’t know this beforehand.

Next at position 6 boys and girls swimming & diving both had strong seasons in the pool.

Long practices and togetherness as a team seem to be the Golden Rule.

Nikki and Shaun each won gold at the New England Division 1 Championship meet.

We took bronze for the girls and fourth for the boys making these seasons complete.

With their best record in years girls hockey did thrive.

With big wins over Loomis, Andover, Choate and Taft, along with a Watkins Tournament Championship they deserve their place at 5.

The Class of 1993 Rink had a banner first year, and the crowd support was great!

Both boys’ and girls’ teams had outstanding senior classes who this year on our campus got to skate.

Not since 2008 have the boys gone on to the post-season looking for a win.

Because of their playoff run the Boys claim their spot at #4.

Girls hoops too returned to the post-season after a very long time.

Their win over Nobles was the highlight of the winter time and showed how far this team did climb.

They’ve earned the #3 place on this year’s Top Ten.

We say bye to the seniors and wait to see this young group compete again.

At #2  we recognize the successes at the Robert Dewey Squash Center.

You can start at the top, Heise or Silipo, as a great mentor

Their record stands at 76-9

Second places at the New Englands for both our varsity teams

And numbers three and four nationally…you can see what this means.

The top spot this winter goes to our alpine ski team for all they have done.

Their near-perfect season earns them a well-deserved #1!

The boys won all their meets and the Girls won the coveted New England Championship race.

No other Class A school there that day could keep pace.

Congrats to those seniors FJ, Frederick, Garrett, JP, Maddie, and Val for your leadership and grit.

You leave behind a healthy legacy of success and no quit!

Congratulations to Deerfield for a winter we won’t soon forget.

You’ve all contributed with your smiles, determination and sweat.

These successes you’ll learn only last with you for a few years or so.

What I know to be true is that your memory of teammates will continue to grow.

Always look ahead and be the best sportsperson you can be.

That’s the Deerfield way and it makes us a stronger community.

Awarded to that member of the varsity wrestling team who in the opinion of the team and coaches was outstanding in leadership, sportsmanship, and ability.

For that player who manifests the spirit of Robin Keller and Katie Birrell, Class of 1992. They led by example and played with intensity, courage, and passion.

To that senior who in the opinion of the players and coaches contributed most to the spirit and excellence of Deerfield hockey.

To that senior who has come up through the swimming system who has demonstrated ability, leadership, improvement and devotion to the sport.

To be given to that senior who in the opinion of the coaches is the outstanding swimmer on the basis of his contribution to the sport.

To that member of the Deerfield Ski Team who has a genuine concern for the ski program’s success and who has similarly shown a loyalty to the concept of team skiing.

Chosen by coaches, it is given to a member of the ski team who most represents dedication to and love for Deerfield simply by doing her best for the school through the ski team.  The award honors the memory of Art, Deerfield faculty 1937-1970, ski coach, and loyal son of Deerfield.

To that Deerfield Skier who has exemplified the qualities of Doug Parker, a skier who developed collegiate ability through his dedication to the sport, a dedication derived not for fame but rather from a personal search to find his maximum ability. To Doug Parker success did not necessarily mean good results; it meant skiing the best he could.

Given to a member of the boys’ ski team who is the most valuable member of the team, whose unselfish competitiveness best exemplifies the winning spirit of the team while honoring Scott’s great spirit, love of Deerfield, and his inherent goodness towards people.

In memory of Bruce Bayne – 1944. To that player who exemplifies the qualities Bruce Bayne ’44 brought to the game of squash while at Deerfield.  His championship qualities of natural talent, sportsmanship, leadership and the will to be the best are what the game of squash is all about. The recipient of this award should be proud of and build on her accomplishments in squash and in life.

This winter our teams embraced opportunities of growth and gave back to the community. Our school spirit is thriving! Classmates watched and continue to watch classmates compete and perform. Support of others is contagious and contributes significantly to that shared experience we support at Deerfield!

Mr. Howe shared a final message with the audience, “Demand quality in all that you take on, but remember to be kind to yourself. Don’t dwell on the 5% of strife in your life but rather gain confidence from the 95% of the things you get done each day. Congrats on a great winter and let’s have a happy and healthy spring season!”

Congratulations to our team, coaches, and student-athletes on the winter season!