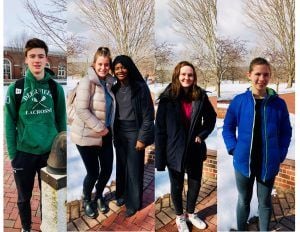 Junior Grace is a stalwart member of the JV swim team, bringing dedication, hard work and joy to the pool.  Grace had an excellent final week, posting personal best times in the 50 fly and 100 IM.  Notably, Grace finished the season by swimming the 500 free, with an impressive performance.  Grace is a dedicated athlete and an excellent teammate, and she is truly deserving of the athlete of the week award.

New to DA this year, but no stranger to the pool, Lucy has been a valuable addition to our JV team.  Lucy has an impressive work ethic, a wonderfully positive attitude, and an infectious sense of fun, inspiring other student athletes along the way.  This week, Lucy concluded her excellent season with best times in the 50 back, 50 fly, and 50 free.  A lively and positive presence, Lucy is a natural choice for athlete of the week.

This final week of the winter term the boys JV hockey team selects Mike Scharfenberger as their athlete of the week. Mike has come a long way this season in both his skill development and being a great team member. Asking Mike to take on various roles throughout the latter half of the season filling in wherever he was needed was always met with a “can do” attitude. He gave 100% to whatever role he was asked to do. On Saturday, while playing forward on a line with Steven Li and Peter Marchese Mike was a force at both ends of the rink. He skated hard and gave his team the best effort he could muster. In the second period Mike found himself battling for a puck in our offensive zone going against three Westminster defenders. Things got rough and as the three opposing players committed penalties on Mike he maintained his cool, and put his team’s needs first. The result was three Westminster penalties and Deerfield scored two power play goals as a result to seal a win for BIG GREEN. Now that’s a teammate we’d all like to have!

Lily has been a terrific manager for the last three years and finished her career with two tough road trips. She never complains, always does her job, and is willing to help the team. Thank you Lily for the many hours that you have put into our team!

The Girls’ Varsity Squash Athlete of the Week, Ashley Manning, squared off against top-level national and international players at the New England Championships this past weekend. Playing spectacular squash herself and modeling superior sportsmanship, Ashley clearly demonstrated why she’s one of the very best squash players ever to wear a Deerfield uniform.

As a member of both the Step Team and Girls Thirds Basketball, Sydney Dinkins ’22 wasn’t always available to come to practices and games, but when she was there, she gave us her full attention and energy.  Her strong work ethic and positive, can-do attitude enabled her to become one of our most reliable rebounders.  In our final game of the year, she took on a new role as a guard, and put meaningful points on the scoreboard, helping turn the tide of a game that was getting out of hand into a game in which we were contenders.  For her positive contributions to the team, we name Sydney Dinkins as our Athlete of the Week.

The AOTW for JV Basketball was Nasir Barnes. Against Eaglebrook, he scored 17 points and grabbed 10 rebounds. He followed up with a 8 point, 3 rebound, 3 steal performance against Choate to end the season as our leading scorer.