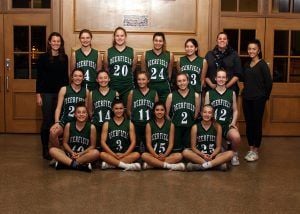 In the semifinal match-up hosted by #3 Loomis, the Doors were led by the offensive effort of senior captain Emma Reavis who scored 26 of the team’s 57 points. Kelly Lahart ’20 scored in the double digits sinking 14 points for the Big Green. Claire Cummings ’21 and Melissa Mitrovic ’19 each registered seven points in the game. Despite the stifling defensive display from the Big Green, at the game’s final buzzer, Loomis prevailed to advance to the championship game.

The Big Green closed out their season posting an 11-11-0 record. In addition to concluding their 2018-19 season as NEPSAC Class A semifinalists, the team was a finalist at the 2018 Girls Basketball tournament and advanced to the semifinals in the 2019 Eight Schools girls basketball tournament this season.

Congratulations to the team and coaches on their impressive 2018-19 campaign!