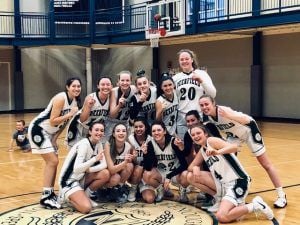 Another season is underway for the girls varsity basketball team: the post-season. Already, advancing further in the 2018-19 Class A NEPSAC tournament than any Deerfield girls basketball team in recent history. This year’s team is primed and ready to further extend their mark in the Deerfield record books

Tess Mannix ‘20 led Deerfield’s scoring with 16 points on 6/8 field goal attempts, including 4/4 from behind the arc.  Claire Cummings ’21 earned a double-double with 13 points and 10 rebounds, while senior captain Emma Reavis earned a rare triple-double with 11 points, 12 rebounds, and 15 assists.  Kelly Lahart ’20 and Melissa Mitrovic ’19 rounded out the balanced scoring with 11 points apiece.

The Deerfield squad showed poise and determination from the moment they stepped on the court, and they controlled the pace of the game from the outset.  For the first time in recent Deerfield history, the girls are moving on to the semi-final round of the NEPSAC tournament and will play #3 Loomis Chaffee School at Loomis this Saturday, March 2 at 3:30pm.

Loomis will be livestreaming the game, click here to watch.