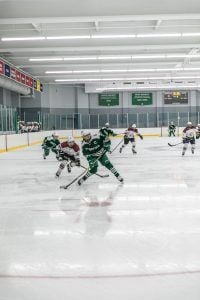 The girls varsity hockey team carried their 2018 success into 2019 this weekend. After closing out 2018 by capturing the E. G. Watkins Holiday Tournament title, the team resumed their season schedule in a double-header this past weekend facing off against The Hill School on Saturday night and returning to the ice on Sunday to face Lawrenceville. The Big Green earned victories in both contests to sweep their opponents this weekend and kick-off their 2019 schedule of games as an undefeated team.

On Saturday night with a crowd-filled rink, the team began their 2019 quest against the visiting Hill School.  The Big Green fell behind early, 0-1, when the Rams opened the scoring in the opening minutes of play.

In the second period, the team began to find their legs and competed for pucks all over the ice. Haley Sundstrom ‘21, Brianna Felice ‘21 and Kelly Howe ‘22 won battles down low, got the puck to the net, and then jammed the rebound home. Sundstrom netted the goal, and Felice and Howe had the assists. Ellia Chiang ‘21 scored the eventual game winner toward the end of the second period, pouncing on a loose puck at the defensive blue line and drove in alone on goal.

It was a back and forth affair in the third period. Jordan Manning ‘19 helped preserve the one-goal lead for the Big Green, denying several strong scoring attempts while making 21 total saves.

In a quick turn-around, the Big Green returned to the ice on Sunday afternoon for a matinee game against Lawrenceville.

The team came out strong from the first whistle, dominating possession and getting lots of shots to the net. The Big Green finally broke through early in the second on the power play: good movement led to a fantastic opportunity for Christina Halloran ‘20, and while her bid was denied by the talented Lawrenceville goaltender, the puck made its way back to Deirdre Mullowney ‘19, who blasted the puck into the net with Mae Emerson ‘19 and Mary Edmonds ‘19 earning the assists.

With the big, supportive crowd going wild, Edmonds extended the lead minutes later (assists to Mullowney and Lisa Ito-Bagshaw ‘21) when she drove wide and then cut to the net, slipping the puck into the goal.

Liv Mikesell ‘20 earned the shut out in goal with 18 saves.

According to the coaches, Sunday’s game was the team’s most complete game of the season. The Big Green displayed a strong team effort across the board!

The Big Green will complete their three-game homestand this Wednesday, 1/9 against neighboring NMH. Puck drops at 2:30pm and you can watch all of the action on the game livestream.