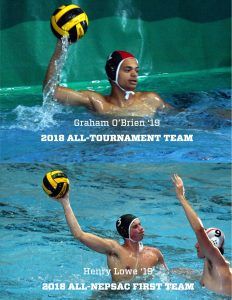 Goalie and co-captain Graham O’Brien was named to the boys water polo All-Tournament Team after the conclusion of the boys water polo championship tournament. In the post-season, Graham led the Big Green in goal. In the New England Championship play-in game, Graham made eight saves to help the Big Green defeat Canterbury 12-8 and earn their berth into the New England Championship semifinal. Graham continued his season-long heroics in goal through the championship semifinal and consolation final.

Co-captain Henry Lowe was named a First Team All-New England player for his impact in both ends of the pool. He was an offensive weapon for the Big Green and his intensity on defense stifled many opponents attacking opportunities. Henry along with the other named All-New England players were recognized in a recent Boston Herald article.

This season the boys varsity water polo team advanced to the New England Championship semifinals and finished the season as the fourth ranked team in New England while posting an overall season record of 11-7.

Congratulations to Graham, Henry and the boys varsity water polo team on a great season in the pool!