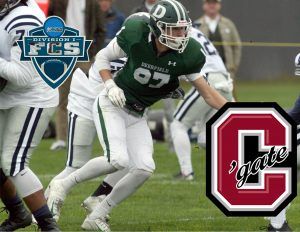 The Raiders earned their No. 8 seed after winning the Patriot League and finishing 9-1, with their only loss to an FBS Army team that is now ranked 23rd in the major polls. With the eighth-seed the team earned a bye through the first-r0und of games. The Dukes clinched their spot today’s second round game by defeating Delaware, 20-6, in last Saturday’s first-round game.

So far in his rookie season, Bevino has contributed on the offensive side of the ball, making three catches for 31 yards. Tune in today’s game on the ESPN3 telecast/livestream.

Good luck to Mike and the Raiders today!