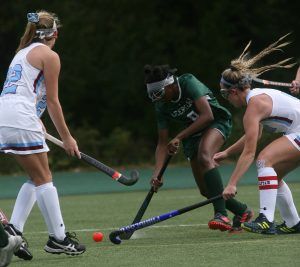 On Wednesday, the varsity field hockey team traveled to Westminster to face off against a skilled, fast, aggressive and well-coached Martlet team.

The ball changed possession often throughout the game and Westy scored first to take the lead, shortly into the second period.  A steady defense, often lead by sophomore Talbot von Stade, kept the Westminster team within reach.  With six minutes remaining, Meredith Heaney’s ’19 pass found Sharon Kereke ’19 in the circle and Kereke was able to fire one at the goal for Deerfield’s first goal of the game.  A few minutes later Kereke had a second sure shot at the goal when she was fouled in front of the cage.  A penalty stroke was awarded for the foul and Heaney was able to put it away and improve Deerfield’s goal tally to two.  Deerfield held on for the final minutes and walked away with an exciting 2-1 win.

With Wednesday’s win, the Big Green improve their season record to 9-1-0 and extend their current winning streak to three games. The Big Green will look to register another win tomorrow, Saturday, October 20th when they travel to Taft to face-off against a 7-3 Rhinos team.