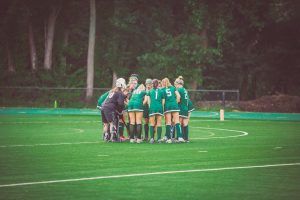 A week into the fall sports seasons and the doors are off to a great start.  The boys varsity soccer team kicked off this fall’s early success with a home field 3-3 tie vs. visiting Avon on Wednesday, September 12. The remainder of the Big Green varsity teams kicked-off their seasons on Saturday, September 15. Big Green varsity field hockey led the way, earning a decisive 6-1 win on their home turf vs. Berkshire.  On the road, the varsity volleyball team defeated Milton Academy in straight sets, 3-0, and rallied in their second match of the day to defeat Miss Porter’s School, 3-1. The varsity girls soccer team also traveled to Milton Academy to open their season against the Mustangs and in the final five minutes of play tied the game, 1-1.

At home, the boys and girls cross-country teams welcomed visiting schools to the Pioneer Valley for the annual Brush Invitational named for Deerfield’s longtime cross country coach. The race offers an opportunity for all runners to participate in their first race of the season and establish benchmark times for the season ahead. At the event, the Deerfield runners turned out strong individual and team efforts. On the girls side, tenth grader Noelle Abeyta won the two mile underclass race and junior captain, Victoria Patterson won the upper class race. For the boys, tenth grader Charlie Lewis was the first Door to cross the tape in the ninth and tenth grade two-mile race. In the upperclass race, the two senior captains, Ricardo Gonzalez and and Tom Dillon paced the Big Green earning fourth and ninth place finishes respectively.

The boys water polo traveled to Brunswick for a quad-meet, the team lost its opening game to host Brunswick 3-19 and returned to the pool to defeat rival Choate 15-3.

To conclude the opening fall Saturday, the varsity football team defeated visiting Lawrenceville 28-18, scoring on the ground and in the air!

Deerfield teams have jumped out to a fast start this fall, but there is always room for improvement and more progress to be made over the course of the next two months! Keep working hard Big Green!

Teams return to action this Saturday, visit the Athletics Schedule for a complete listing of game times and locations!