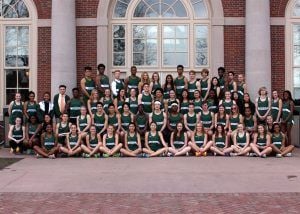 Stevens captured the 2018 title in the discus throw.  In his best throw of the day (142-02), he threw the discus fourteen feet further than any other competitor did at the championship event.

On the track, Patterson earned two All-New England distinctions. First, she earned a gold medal in the 1500 meter run (4:40.12) and shortly thereafter she returned to the track to race to a third place finish in the 800 meter run (2:17.08).

In the boys hurdle events, Deerfield earned two All-New England honors.  In his first New England Championships, Machen was second in the 300 meter hurdles (40.16), coming only .17 of a second behind the first place finisher, and in his final track and field meet wearing the Green and White, senior Ossie Heard earned the bronze medal in the 110 meter hurdles (15.96).