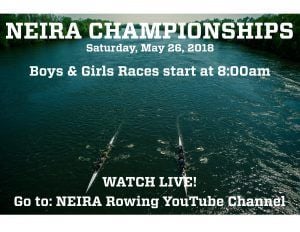 Boys and girls rowing will travel to Worcester, MA tomorrow, May 26th to the New England Interscholastic Rowing Association championships with their sights set on becoming New England champions.

This season, the boys rowing team posted an undefeated regular season, winning all five of their events. In 2017, the boys rowing team claimed the overall team title at the NEIRA championships for the first time in program history.  In addition they claimed gold in the first, third and fourth boats.  The second boat finished in third in the finals.  With the NEIRA win, the first boat earned a bid to the US Rowing Youth National Championships in Sarasota, FL where their success continued, earning another gold medal and the title of fastest youth 4V+ boat in the country.

A year ago, the girls rowing team also enjoyed a successful 2017 campaign, the first boat led the way at last year’s NEIRA championship easily securing a place in the finals, where they increased their lead with every stroke to capture gold and earn their bid to the US Rowing Youth National Championships.  Overall, the girls team finished in fourth place at the New England Championships.  The girls first round boat concluded the 2017 season with a win in the consolation final at the national championship regatta.

In 2018, the girls rowing team has secured victories in four of their five events.  Again, the veteran first boat leads the way for the team this season, posting wins in four of their races and one second place finish.

Tomorrow, the boys and girls rowing teams will look to continue their successful 2018 season’s at the New England Championships.

You can tune in to watch the NEIRA championship races live on the NEIRA YouTube Channel. View tomorrow’s race schedule here.