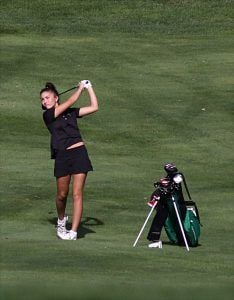 On Wednesday, the varsity golf team defeated Westminster and Williston in their final regular season round to complete their record setting undefeated season at 15-0.  The Big Green collectively shot a 190 to best their previous season-high stroke-play score (191) by a stroke.  Westminster scored a 206 and Williston shot a 196.

In the tri-match, Matt Brosseau ’19 had the best round of his Deerfield career, shooting a 37.  Teammate, Kimberly Stafford ’19 also shot a 37 in the outing to share the medalist honor for the lowest score of the match.

To add to their historic season, the Big Green captured the Newport Cup for the first time since 2014 at the annual Andover Invitational held at the Newport Country Club.  The team recorded the lowest score (303) in the eight-team tournament.  Furthermore, the Doors defeated Taft in a head-to-head match for the first time in four years (2014: 196-216)

Senior captain Lowell Weil and Kimberly Stafford ’19 have led the way for the Big Green this season, combining five times to earn medalist honors for the lowest score in the stroke-play matches.

Looking ahead, the team will travel next to Kingswood-Oxford on Wednesday, May 23 for the New England Championship Kingswood-Tournament match.  Tee times start at 10:00am.