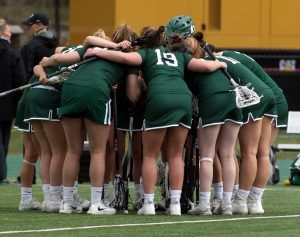 Last Friday night under the turf lights and sunset in Pomfret, CT, the Big Green defeated the Griffins by a score of 15-4.  Intensity, midfield passing, shot placement and defensive communication were all team highlights from the game.  With Friday’s decisive win, the team reached ten consecutive wins this season and with two games to play, their record sits at 10-2-0.

It has been ten years since the girls lacrosse team achieved a double-digit win season, in 2008, the team’s final record was 11-3-0 with wins coming against, Millbrook, Andover, Choate, NMH, Taft, Westminster, Loomis, KUA, Cushing, Berkshire, and Exeter.

To date this season, the team has amassed 156 goals while only conceding 75 goals; displaying their balanced dominance.

In their final home game of the season, the Big Green will welcome Berkshire today, May 16 at 4:00pm.  The team will cap off their 2018 season on Saturday, May 19 when they travel to Exeter for a 1:00pm game against the Big Red.

This year’s squad has already seen one record fall when they defeated Williston, 9-6, for the first time since 1998.  With two games left to play this spring, the Big Green has their sights set on making more of their own history this season!

Tune in to watch today’s game on livestream!