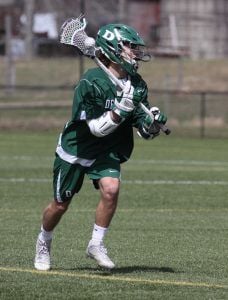 On Wednesday, the Deerfield boys lacrosse team came back from a two-goal deficit to pull off the upset win over #2 ranked Salisbury in the team’s final home game of the 2018 season. Salisbury’s national rank is according to this week’s UA/IL rankings.

At halftime, the Big Green trailed 2-3 and the Knights extended their lead to start the second half to 5-3.  Nearing the end of the third quarter the Big Green stifled the Crimson Knight’s offense and went on a six goal scoring streak to gain and ultimately retain the lead for the remainder of the game.

Senior co-captain Nolen Rockefeller led the way for the Big Green registering four goals in the victory.  Zach Davis ’19 followed by netting two goals of his own.  Sam Powell ’18, Connor Guest ’18 and Young Hur ’18 each tallied a goal to round-out Deerfield’s scoring.

The team’s record sits at 12-2-0 which included an 11-game winning streak that spanned from April 4th to May 9th.

To add to Wednesday’s excitement, the boys JV lacrosse team also rallied back from a third quarter 2-3 deficit to defeat the Crimson Knights 4-3.  The girls varsity and JV lacrosse teams also earned wins to complete Wednesday’s lacrosse sweep.  Girls varsity lacrosse extended their historic winning streak to 11 games by defeating Berkshire 16-2 in their final home game of the season.  Girls JV lacrosse traveled to Easthampton, MA to defeat Williston 10-6 to remain one of three undefeated Deerfield teams this spring.