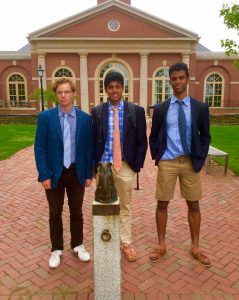 Boys – Alton Machen.  Running on a bad shin, Alton ran a tough, gutsy race in nasty conditions on Saturday to win the 300m hurdles against NMH and Exeter.  The field was strong, full of competitors he will see again in the New England Championships this weekend, but Alton ran a near-perfect race to win in dominating fashion.  He then returned to lead off the boys’ 4x400m relay, which finished 2nd.

Girls – Lily Louis.  Battling an illness and the rainy, cold conditions, Lily nevertheless won both the 400m and the triple jump against NMH and Exeter.  The double win was a fitting result in her final “regular season” meet after four years of gritty, selfless competition for Deerfield.

The JV baseball team would like to nominate Jack O’Neil ’20 as our AotW. Jack has played excellent defense at shortstop all season and consistently finds his way on base. He came in as a relief pitcher on Saturday against Andover and threw five scoreless innings against Eaglebrook on Monday. Jack showed the grit, toughness, and persistence that we value most as a program.

Softball’s athlete of the week is Suzy Mazur. For four years she has been a consistent player who always puts the team’s needs first. She is an excellent outfielder who moves well on and off the ball. Suzy’s bat has come alive at the plate and her speediness allows her to steal bases with ease. She gives all of herself in each practice and game, which is why she is an asset to the team.

Nick Solberg is the AOTW for varsity baseball.  Nick pitched 5 innings, giving up 7 hits and 4 runs, while striking out 3 in an 11-4 win over Williston on Monday.  Nick has contributed valuable innings on the mound for the Deerfield nine this spring.  Nick has also been a vocal and supportive member of the team this year.  Great stuff Nick!

Our athlete of the week is Hollin Hanau.  Hollin scored two goals in our Pomfret game and has demonstrated consistent leadership and positivity throughout the season.  She has been unwaveringly upbeat and a true team player throughout her three years on the varsity lacrosse team.

The number one doubles team of captains Alex Alijani and Jeffrey So rose to the challenge of staging a huge comeback in their match against Loomis last Wednesday. Both have shown strong leadership on and off the court this season, and their presence has been instrumental in the team’s success.

Kristen has done a really good job this season of taking charge in her role as coxswain. She is very knowledgeable in the sport of rowing yet is able to adapt well to new challenges. We were really impressed by how well she bounced back from the beginning of the season. Great job Kristen!

Monet Meyer ’19 came off the bench to score a key goal in the fourth quarter against Hopkins last Saturday.  Whether called upon to play a few minutes or an entire quarter, Monet, ever-prepared, contributes to the team’s success.

Deepak Pathapati went 6-0 last week, clinching our victories against Hotchkiss and Exeter. His season record is 19-5, and he has won 13 matches in a row dating back to April 21.

Matt is the varsity golf athlete of the week! Matt was the medalist of the match vs. Williston and Westy. He shot a 37, his personal best DA score.