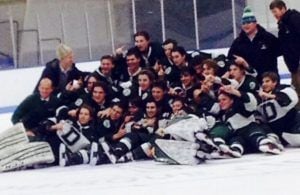 Girls Varsity Hockey travels to Ashburnham, MA for the Edward G. Watkins Girls’ Invitational Hockey Tournament hosted by Cushing Academy. The girls will play in the Iorio Division of the 8-team Tournament and play 3 round robin games between Thursday and Friday before the championship games on Sunday. Tonight, 12/14 the team will face Worcester Academy at 6:10pm and tomorrow they will play Northwood School (11:40am) and the New Hampton School (7:00pm). The enters coming off a come-from-behind tie 2-2 at St. Paul’s this week.

The boys varsity hockey team will look to defend their 2016 Flood-Marr Tournament title this year. The team enters the 53rd Annual Flood-Marr Tournament with an overall 1-2 record. The team will play in the Harding Division of the 8-team tournament. They will open the tournament against Milton tomorrow, 12/15 at 9:00am at the Milton Arena. The team will rest up for their second game of the tournament tomorrow night at 7:00pm vs. KUA at the Milton Arena. Their 3rd tournament game will be played on Saturday, 12/16 at 3:00pm vs. Salisbury at the Nobles Rink. Following the 3-game round robin, the championship match ups will be set for Sunday, 12/17. Stay tuned!

The boys varsity basketball team enters the 2017 Class A Winter Classic Tournament on a 2-game winning streak after defeating Westminster, 66-51 and Pomfret, 71-45 this week. The Big Green will play all of their tournament games at Belmont Hill and open up against Milton on Friday, 12/15 at 2:00pm and will play 2 games on Saturday, 12/16. First up on Saturday will be Belmont Hill at noon and Nobles at 3:30pm.

This year, Deerfield will host the 2017 New England Girls Basketball Classic on December 14-15th. The tournament brings 7 visiting teams to Deerfield for the 8-team tournament. Participating teams include; Deerfield, Cushing, Pomfret, Miss Porter’s, Choate, St. Paul’s, Brewster, and Berkshire. Deerfield opens the tournament today, 12/14 at 3:30pm vs. Miss Porter’s and their subsequent games will be determined based upon this afternoon’s result.

All team results will be posted on the Deerfield Athletics website so, check back for score updates!