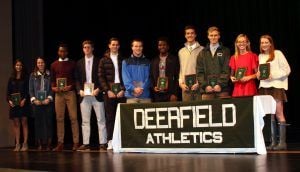 The Deerfield community gathered yesterday at School Meeting to celebrate fall team accomplishments and to recognize the 2017 fall athletic award winners. The meeting followed a new format, which included senior cross-country co-captain, Nora Markey sharing a reflection of her time as a Deerfield student-athlete and Mr. Howe kicked off the ceremony with his traditional Fall Top 10 poem.

This fall was amazing. I’m sure you’d all agree

What made these months so special to us all, including me?

Was it the sun and the warmth of the Indian summer season?

Or being with friends on teams that proved to be the reason.

You stand a chance at making my Top Ten.

So let’s begin as I mention these two men.

These are behind the scenes guys who help make games go smoothly again and again.

Mr. Ahbel and Dancer get the vote at number 10.

His four goals on Choate Day were simply divine!

You can never say never and you’re never too late.

Running cross country at Deerfield has been an incredible experience, and I wouldn’t change it for the world. It isn’t just the music we blast in the vans, although that is arguably one of the best parts. One of the most rewarding aspects of running cross country at Deerfield has been watching the team improve each year. People say cross country is an individual sport, but one runner can’t win a race for a team. A positive peer pressure and a common desire to win caused us each to learn to run as hard as we possibly could, not for ourselves, but to carry our own weight for the team. This year, when we won New Englands, it didn’t feel like an accident. Rather, it was a goal that we, as a team, had been working hard towards for years, and had finally achieved… Click here to read more or tune in here to watch Nora’s keynote speech.

Awarded to the varsity runner who, in embodying the spirit of our coach, Moreau C. Hunt, was not afraid to realize his own full potential and whose personal interest never rose above those of his team.

To honor the enthusiasm and love of the sport shown by Peter Brush, this award is given to the runner who, in the opinion of his teammates, has contributed the most to team morale.

Awarded to the varsity runner who, in embodying the spirit of our coach, Moreau C. Hunt, was not afraid to realize her own full potential and whose personal interest never rose above those of her team.

To honor the enthusiasm and love of the sport shown by Peter Brush, this award is given to the runner who, in the opinion of her teammates, has contributed the most to team morale.

To that member of the field hockey team who, with a positive spirit, gave her best effort to the game every moment she was on the field.

In memory of Thomas Williams Ashley, Class of 1911. “He played the Game”

“In the spirit and memory of Frank Dahowski”

To that member of the team who, in the opinion of the players and coaches contributed the most to the success of the team. (Awarded annually since 1923)

To that girl, by her exemplary skill, sportsmanship, and devotion to her teammates, has made a significant contribution to the varsity soccer team.

Awarded to the player who provides leadership on and off the court, has achieved a high level of technical skill, and brings pride to the team and Deerfield through her play and sportsmanship.

To that player who, in the eyes of the coach and fellow players, shows the greatest understanding of what a true athlete embodies. Through selfless dedication to the team, sportsmanship in and out of the pool, and an undying love for the game in both victory and defeat, this player represents the highest ideal of Deerfield athletics and has earned the respect of teammates and opponents alike.