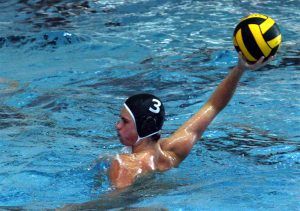 In their last game of the regular season, the boys varsity water polo team defeated Suffield Academy on the road by a score of 14-11. Senior captain Andrew Penner ’18 led the offense, scoring five goals. Shaun Kronenwetter ’19 added four goals, Nolen Rockerfeller ’18 and Henry Lowe ’19 each had two and Kevin Gu ‘18 contributed one. On defense, goalkeeper Graham O’Brien ’19 finished the game with 14 saves, bringing his season save total to 194 saves through fifteen games.

DA held onto a 4-3 lead after the first quarter. In the second, the team continued to work hard, scoring another four goals, while only letting up two. The final two quarters proved to be more even as each team put away six goals. When the final whistle blew, Deerfield took the victory 14-11.

With the win, the team now holds an overall record of 10-5 on the season, improving from last year’s 2016 record of 8-9. DA continues to have a powerful offense, outscoring opponents 203-167 in their fifteen games. On average, they score 13.5 goals per game and only give up 11.1.