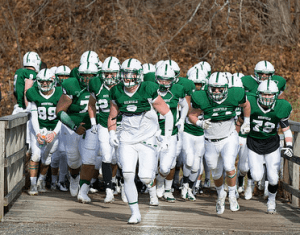 The Deerfield varsity football team has been awarded a bowl game to end their 2017 season. On Saturday, November 18th, the team will travel down to Pawling, New York to face the Trinity-Pawling School, another 6-2 squad, in the Mike Atkins Bowl. The DA football team has not played in a bowl game since 2002, when the Big Green recorded a 21-14 victory over Hotchkiss in the 2002 New England Prep School Athletic Council Division I Super Bowl.

Deerfield has an overall record of 6-2, their best record in over five years. DA’s losses have come from Suffield Academy on September 23rd and Choate Rosemary Hall on this past Saturday. Despite Saturday’s loss, Deerfield held the explosive Choate offense to the fewest amount of points they’ve scored in a game this season with 28.

The Big Green have been great on both sides of the ball this season. Deerfield has recorded 204 points through their eight games and have only given up 115 points, equating to 14.4 points per game. DA will face a strong opponent in the 6-2 Pride who have not lost since September 30th. The two teams have two common opponents, both facing Loomis and Hotchkiss in the regular season. Trinity-Pawling fell to Loomis (22-24) and defeated Hotchkiss (56-28). Deerfield recorded wins over both Loomis (30-23) and Hotchkiss (26-0).

Kickoff is set for 1:00pm on Saturday on the Trinity-Pawling campus. Livestream links to come shortly.