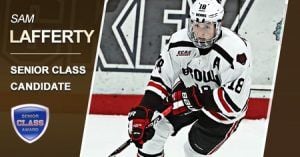 Sam Lafferty ’14, now a senior on the men’s ice hockey team at Brown University, has been named as one of 20 candidates for the 2017-18 Senior CLASS Award for men’s ice hockey. An acronym for Celebrating Loyalty and Achievement for Staying in School®, the Senior CLASS Award focuses on the total student-athlete and encourages students to use their platform in athletics to make a positive impact as leaders in their communities. To be eligible for the award, a student-athlete must be classified as an NCAA Division I senior and have notable achievements in four areas of excellence: community, classroom, character and competition.

When Lafferty first arrived in Providence in 2014, he made an immediate impact on the team. As a freshman, he appeared in all 31 games, dishing out eight assists and scoring four goals. He continued his success as a sophomore, playing in all 31 games again and finishing with 10 points on four goals and six assists. Elected assistant captain as a junior, Lafferty had a stellar year, leading the team in points (35), assists (22) and games played (31). He was also second in scoring with 13 goals, averaging 1.13 points per game. For his efforts, he was awarded Second Team All-Ivy honors and team MVP. This season, the Hollidaysburg, PA native will again serve as assistant captain in his final campaign.

At Deerfield, Laffery was a three-year member of the boys hockey team. As a senior captain, he posted 55 points on 21 goals and 34 assists in 25 games. He was named to the 2013-14 All-New England Team and was the recipient of the Deerfield Hockey Cup, awarded to that senior who in the opinion of the players and coaches contributed most to the spirit and excellence of Deerfield hockey. In 2014, he was selected by the Pittsburgh Penguins in fourth round of the 2014 NHL Entry Draft.

The 20 Senior CLASS candidates will be narrowed to 10 finalists in February, and those 10 names will be placed on the official ballot. The Senior CLASS Award winner will be announced during the 2018 NCAA Men’s Frozen Final Four® in April.

Congratulations and best of luck with the rest of your season, Sam!