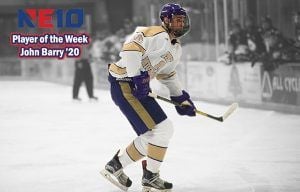 John Barry ’16, a sophomore at Saint Michael’s College, was awarded Northeast-10 Conference Player of the Week for men’s hockey this week. In Saint Michael’s game on Saturday against Franklin Pierce, Barry scored two back-to-back power-play goals, leading his team to a 4-3 victory. Through five games, Barry is currently first in the Northeast-10 Conference for power-play goals (2) and tied for third in goals (2) scored. This was his first multi-goal game of his career. Last year as a freshman, Barry played in 16 games, recording three goals and four assists for a total of seven points.

Congratulations, John, and best of luck with the rest of your season!