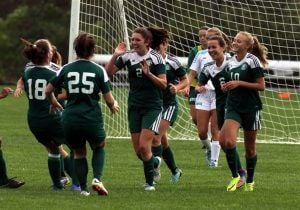 On Wednesday, the girls varsity soccer team traveled down to Wilbraham & Monson for their last away game of the season. The DA girls ran hard all 80 minutes and were able to come out on top with a score of 2-0, earning their first win of the season.

Right from the opening whistle, DA was hungry for a victory. The opening minutes featured multiple offensive chances for the Big Green. It was senior forward, Brenna Hoar ’18 who put Deerfield in the led off a long range strike from the edge of the 18-yard box. Junior forward Margaret Williams ’19 dished the ball off to Hoar ’18 who received it, made a quick turn and struck the ball hard, sending it past the outstretched arms of the Wilbraham keeper. The rest of the first half featured good defense from both teams, leaving the score line 1-0 heading into halftime.

In the second half, the Deerfield offense came alive, taking players on 1v1, combing in the final third and getting shots on goal. Midway through the half, junior forward, Emma Revis ’19, showed off some fancy footwork as she weaved in and out of two defenders and chipped the ball over the head of the Wilbraham goalie to extend the lead to 2-0 for Deerfield. The rest of the half featured a solid defensive performance from the Deerfield backline which consisted of Emma Visnapuu ’21, Hannah Valencia ’18, Nicole Da Costa ’19, Jill O’Connor ’19, Lilly Berry ’21, Mae Emerson ’19 and goalkeeper Valerie Hetherington ’19. On the day, Deerfield recorded their third shutout of the season.

When the final whistle blew, the DA girls were excited and extremely happy that their continual hard work all season had finally paid off. The great day was capped off with a quick stop for pizza at the Hoar’s house and a happy bus ride back home featuring some mediocre singing and lots of laughter.

The team is back in action on Saturday for Choate Day as the girls close out their season with a 11:30am home game.