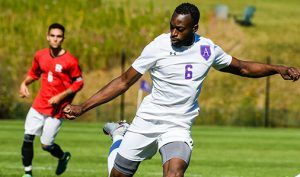 After graduating from Deerfield in 2015, Fikayo Ajayi continued his soccer career at Amherst College. Since his freshman campaign, he and his Amherst teammates have enjoyed great success. As a freshman in 2015, Ajayi was a member of the NCAA National Championship team. Then, last year as a sophomore, Ajayi helped Amherst to a 2016 NESCAC Championship title. This year as a junior, Ajayi has had a break out year, making starts in 12 of the 15 games he’s played in and scoring five goals while assisting one. He is currently second on the team for points with 11.

At the end of this regular season, the Amherst men had an overall record of 11-2-2 and headed into the NESCAC tournament as the #2 seed. However, in their opening quarterfinal game, the Mammoth’s fell 4-3 to Hamilton College, eliminating their chances at an automatic bid into the NCAA tournament. Despite this, the team received an at-large bid to compete in the tournament.

In the opening round of the NCAA tournament this past Saturday, Ajayi, came up huge for the Mammoths, scoring twice in a 2-1 victory over Salem State University. The first goal game off a penalty kick in the 23rd and the second was from a corner kick to break a 1-1 tie. With two-minutes left to play Ajayi, bent a corner kick into the net from the end line to give Amherst the lead and the ultimate win over Salem State.

In the second round game on Sunday, Ajayi and his Amherst teammates again were victorious but this time in a more dramatic fashion as they advanced to the third round defeating Springfield College on penalty kicks.

Congratulations on a great season and good luck in the rest of the tournament, Fikayo!