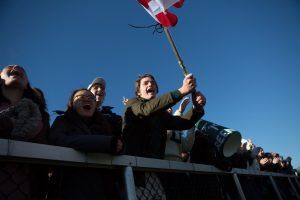 Saturday marked another great day for the annual Deerfield-Choate rivalry. With the support from family, friends, alumni and fellow students, the Deerfield athletic teams went 6-3-3 on the day.

Other DA wins consisted of Boys Junior A soccer defeating the Wild Boars by a score of 3-1, JV field hockey with a close 1-0 win and girls reserve soccer notching a 3-1 victory. Saturday also featured many evenly matched games as JV football tied 8-8 and both girls and boys JV soccer finished with 0-0 ties. Despite Deerfield’s best efforts, Choate was able to pull off victories in the varsity and JV volleyball games and the varsity football game. Although varsity football lost, they were able to hold the explosive Choate offense to the fewest amount of points they’ve scored in a game this season with 28.

The Deerfield Athletic Department would like to thank parents, alumni and fans for coming out to support our Deerfield teams on the special day.

Congratulations to all student-athletes on a successful Choate Day and a great overall fall season!