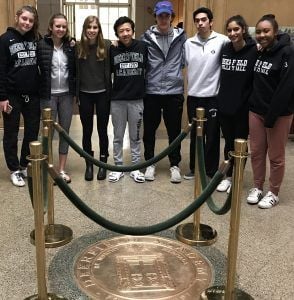 The boys cross country athlete of the week is Ricardo Gonzalez. Ricardo has been steadily improving all season long, and all his hard work paid off with a big breakthrough at Choate on Saturday in the New England Championship race. Ricardo executed his race plan perfectly, running toward the front of the chase pack for the first mile and a half, and then he attacked the hills of Choate’s course and finished with a fast, bold kick to capture 9th place overall in the Division I championship race. His time was a personal best on a tough course—a real step forward for Deerfield’s #1 runner.

The girls varsity soccer athletes of the week are senior co-captains Alli Norris & Ali Dougal. From the first day of preseason Alli has been a trusted teammate and motivational leader for the team. Despite not being able to contribute on the field this season, Alli found other ways to make contribute and make an impact. Alli always supported her teammates in their efforts both on and off the field, whether it was a pregame ritual hand shake, cueing up the perfect pre-game music, holding her teammates accountable in the training room, sharing quotes with her teammates, or motivational pre-game words, Alli knew exactly what her teammates needed and always put them first. Thank you, Alli! Your leadership will be missed next year!

Ali has been a leader by example all season from her work rate and enthusiasm in practice to her communication and leadership on the field on game days. Ali’s enjoyment and passion for the game and for her teammates was contagious throughout the season. At any point during a practice or a game you could watch Ali giving a 110% effort all the while with a big smile on her face! Simply said, Ali was in the moment every moment this season with the best moment of all coming on Saturday in the team’s victory over Choate! Thank you, Ali, for all you have given to the team!

THANK YOU, Alli & Ali, for your contributions to the girls soccer program this year and throughout your DA careers!

Henry Gustavson ’20, David Chen ’20, and Will Holland ’21 are the varsity field hockey athletes of the week. Henry, David, and Will were our managers this season and they did a fantastic job supporting the team. Not only did they join the girls for their morning lifts on Mondays and conditioning sessions on Thursdays, but they took care of all of our equipment needs and warmed up our goalies on a daily basis. They were especially invaluable during games, as they kept the book, ran the lines as ball boys, and tweeted creative live updates from each of our games. Their incredible dedication and positive attitudes went a long way toward making this season such a special one. We thank them for their efforts and sincerely hope they will rejoin the squad next fall…#rolldoors!

The girls cross country athletes of the week are the varsity top seven runners and our two senior captains. On Saturday in the New England Championship meet, everyone put in their best effort, enabling us to win the title. Thank you to all of our runners on your hard work and congratulations on an incredible undefeated season!

At the end of this season, we celebrate our senior co-captains as varsity volleyball’s athletes of the week. Jillian Carroll and Kiana Rawji have provided such steady leadership for us this season. Leading by example on the court and around campus, they were consistently two of the hardest working players on the court and constantly provided enthusiasm and encouragement during practices and matches. During tough matches against St. Paul’s and Choate, both Jill and Kiana kept us levelheaded and made sure that we played “our game”. Thank you both for a great year!

The JV Volleyball athletes of the week are Tess Mannix and Tory Hansen. Tess is a player who shows up to every game with a can-do attitude. Tess makes important and smart plays and encourages a high level of play from those around her. Tess struggled a bit in our game against St. Paul’s but persisted through and ultimately made key plays to help us win the game. Tory Hansen made great progress in her skills this season. At last week’s game against St. Paul’s she made tips and hits that contributed to a solid win. Thank you, Tess and Tori, for your hard work and dedication to your team!

The Boys Jr. A Soccer athletes of the week are Philip Weymouth and Tommy Whiteley. Both Weymouth and Whiteley were instrumental in Deerfield’s wins against Loomis Chaffee and rival Choate last week. Whiteley played his stoutest defense of the season in the final game against Choate, repelling the Choate counterattack repeatedly with careful and intelligent play. His ability to communicate with his fellow defenders, coordinating the DA response to pressure from the opposing offense helped DA to keep its lead in both games. Weymouth followed up a brilliant goal on a deft bicycle kick in the game against Williston the previous week with two solid all around efforts in the front line against Loomis and Choate, including a clean strike past the keeper’s arms for the final go-ahead goal against Choate. His passion kept the team energized throughout the season, and was most evident in this final week. Congratulations, Philip and Tommy!