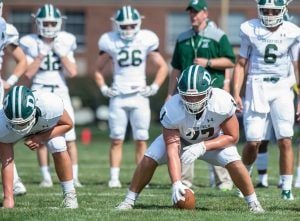 In the Deerfield Varsity Football home opener, the Big Green blanked visiting Hotchkiss 26-0 to improve to 2-1 on the season.

RB Keegan McHugh ’18 kicked off the scoring with a 74 yard touchdown run on Deerfield’s second offensive play from the line of scrimmage. McHugh finished the day as Deerfield’s lone scorer, accounting for all four touchdowns, three of them coming in the 1st quarter. WR Sam Dwinell ’18 chipped in on the offensive end as well with a couple nifty catches, the longest going for 68 yards. First year RB Griffin Schutz ’21 contributed some tough runs during the final stretch of the game to seal the win for Deerfield.

On the defensive side of the ball, Deerfield played solid all game along, not allowing Hotchkiss to score any points over the four quarters. The Deerfield front seven, led by NG Tackle Jackson McCarty ‘19, made it very difficult for Hotchkiss to get anything going offensively. Dwinell and McHugh picked off a pair of Hotchkiss passes and LB Bennett Stankovitz ‘19 blocked a punt that was recovered by DE Bennett Pitcher ‘21. Multiple different Deerfield defenders made their mark throughout the 2nd half to keep Hotchkiss out of the end zone.

Deerfield will be back on the road on Saturday, October 7th when they travel to Worcester Academy for a 3:30pm game.