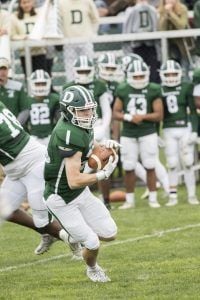 In front of a big crowd of friends and family on Fall Family Weekend, the Deerfield Varsity Football extended their win streak to four games as they defeated visiting Phillips Exeter Academy 42-14. DA has not lost a game in over a month as their last loss came on September 23rd to Suffield Academy in the second game of the season. Since then, Deerfield has been on a roll, winning four games straight and outscoring their opponents 140 to 44.

On Saturday, the Deerfield offense showed off its strength right from the opening whistle. The team came out red hot, scoring the first 42 points of the game, en route to their 42-14 victory. Running back Keegan McHugh ’18 put DA on the scoreboard first with a 2-yard TD run on their first offensive possession. Next, the Deerfield defense forced a turnover at midfield on Exeter’s first possession as free safety Sam Dwinell ’18 intercepted a pass that set up a touchdown of his own. With DA back on offense, quarterback Jack Bill ‘19 found Dwinell in the corner of the endzone for a 14-yard touchdown that made the score 14-0.

On the next possession, the Deerfield defense again came up big as they were able to force a three-and-out, leading to an Exeter punt. However, defensive back Bayard Demaille ’19, was able to get to the Exeter punter, blocking the punt and giving Deerfield’s offense great field position. In the next series, quarterback Jack Bill ’19 connected with running back Keegan McHugh ’18 on the 2nd play of the drive for a 28-yard touchdown to make the score 21-0.

On the ensuing kickoff, Exeter fumbled the ball on the return and Deerfield was able to recover, again giving Deerfield a short field to increase their lead; and they did. On 4th & 10, quarterback Jack Bill ‘19 threw a screen pass to tight end Mike Bevino ’18, who was able to weave through Exeter defenders all the away into the endzone for a 25-yard TD. The final two touchdowns in the first half came on the ground. Running back Keegan McHugh ’18 took an outside run for a 70-yard touchdown and quarterback Cortland Dicks ‘21 ran one in from 37-yards out.

On defense, multiple players stepped up and made some big plays. Along with Dwinell, linebacker Will Kolman ‘19 and free safety Aidan Philie ’20 had interceptions; Kolman’s came on a 4th & goal play off a tipped pass caused by defensive end Bennet Pitcher ‘21.

Deerfield’s impressive 42 points on the day was their highest scoring offensive performance of the season. While the team scored 42 points against Worcester Academy on October 7th, two of the touchdowns came from the defense.

Deerfield only has two games remaining on their 2017 schedule. Both will be home games, starting with Andover on Sunday, October 29th and finishing with Choate on Saturday, November 11th. Both games will be livestreamed on our website.