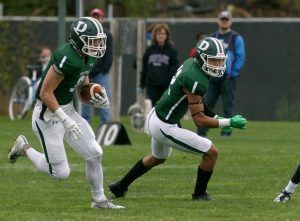 The Deerfield Varsity Football team improves to 3-1 on their season following a 42-7 victory over Worcester Academy on Saturday.

Deerfield came out strong from the opening whistle, dominating the first half. QB Jack Bill ‘19 ran for two touchdowns making the score 14-0. The first TD came off on a 3-yard dive into the end zone and the second was off a fumble recovery on the goal line that Bill ‘19 advanced into the end zone.

While the offense played well all game, it was all about the Deerfield defense who came up big with three interceptions, two fumble recoveries and two defensive touchdowns to seal the game.

For the second week in a row the Deerfield front seven, led by NG Jackson McCarty ‘19, DE Niko Kvietkus ‘18, and DE Garrett Alexander ’19 held Worcester to limited offense. FS Cortland Dicks ‘21 intercepted the first pass of his career at the end of the first half and CB Inho Choi ’18 had his 2nd interception of the season.

The Deerfield defense not only shut down the Worcester offense, but also helped out on offense by scoring two defensive touchdowns. Just as the Worcester offense was driving down the field for the game tying touchdown, LB Bayard DeMallie ‘19 jarred the ball loose from the Worcester QB and LB Bennett Stankovits ’19 picked up the loose ball and went 75 yards for the touchdown to make the score 21-7. On the following possession, FS Sam Dwinell ’18 intercepted a pass in the end zone and returned it all the way for a 100-yard touchdown to put Deerfield ahead 28-7, making the game out of reach for Worcester.

Running backs Keegan McHugh ’18 and Griffin Schutz ’21 added the final two touchdowns runs of the game helping Deerfield to their highest scoring output of the season.

Deerfield will play on the road for one final time this season as they head to Windsor, Connecticut to take on Loomis on Saturday at 3:00pm.