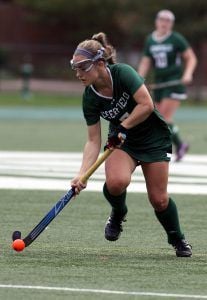 Varsity Field Hockey improves their overall record to 7-2 on the season after a big road win at Loomis on Saturday. The team put in a great overall effort to take down the Pelicans by a score of 2-0.

From the opening whistle, Deerfield came out strong and was able to pressure the home team, forcing turnovers on defense. On the offensive side, the Big Green were in sync, connecting well on their passes all over the field. After several chances, DA was finally able to take the lead off a corner from midfielder Meredith Heaney ‘19 that found the stick of Christina Halloran ’20, who put the ball in the net for a 1-0 lead. Heading into halftime, Deerfield remained ahead 1-0.

After a quick regroup during the halftime break, Deerfield picked up where they left off and came out strong again, their efforts never wavering. Although Loomis put more pressure on Deerfield’s defense in the second half, the girls were able to maintain their composure. In the final two minutes of the game, junior forward, Mimi Pastor ’19, put away a goal from a pass from Juliet Perry ‘19 to seal the Deerfield victory.

The team was led incredibly well by captains Tierney Roche ‘18 and Meaghan O’Brien ‘18, as they both played some of their best field hockey of the season. Other notable performances include Hannah Roche ’21 and Tori Waterfall ’19, who both stood out on the forward line. On defense, Ali Fujiyoshi ‘19 and Christina Halloran ’20 were brick walls in the back, solidifying a Deerfield shutout.

Since the start of the season, the team has had success on offense, outscoring opponents 22-9 through nine games. In addition to their high powered offense, the DA defense has been outstanding as well, earning six shutouts on the season. Their only losses on the season have been to Hotchkiss (6-0-1) and St. Paul’s (8-2).

Deerfield Varsity Field Hockey is heading into one of their most challenging weeks of the season as they welcome Westminster (6-3) on Wednesday at 3:00pm and Taft (6-3) on Saturday at 3:00pm for Fall Family Weekend. Both games will be livestreamed on our website.