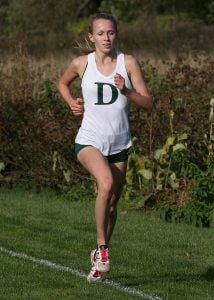 The Big Green Girl Harriers took on defending New England Girls’ Cross Country Champions Phillips Exeter Academy on Saturday during Fall Family Weekend. Thanks to big personal or season bests from every single runner on the team, Deerfield managed to pull off convincing victories in both the varsity (DA 18, PEA 38) and junior varsity races (DA 24, PEA 31).

For varsity, the Big Green were able to take the top three places and have five of the top seven finishers. In the JV race, the Big Green likewise pulled off a victory, winning a tight race in dramatic fashion despite Exeter having an amazingly deep squad.

Throughout the season, DA has improved their focus, become stronger, and are now more confident than ever. This was clearly evident by their performances on Saturday, and it specifically showed in their kicks at the last mile and final straight away. This season, the varsity squad already has two first place team finishes at the Canterbury Invitational and Westminster Invitational and has defeated St. Paul’s, Choate, Loomis and now Exeter.

Deerfield Girls Cross Country only has two more races until the Championship meet on November 11th in Wallingford, CT. They hope to continue on this successful streak as they face perennial powerhouse Phillips Andover Academy on Sunday at home for a 1:00pm race start time.