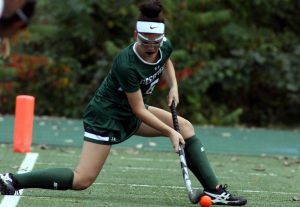 On an extremely wet and rainy day, Deerfield welcomed Phillips Academy to campus on Sunday, October 29th. Despite the unfortunate weather, the Big Green had a great day of competitions.

Varsity Field Hockey: Win 3-1
The Big Green varsity field hockey came up with a huge victory, defeating Andover, the 2016 New England Class A Champions, and halting their undefeated season. From the get-go, the team was psyched for the game and came out strong. Cornelia Mackay ’18 put the first goal away three minutes into the game, and Mimi Pastor ’19 found the back of the net again six minutes later off a pass from Juliet Perry ‘19. Early in the second half, Tierney Roche ‘18 found the back of the net off a pass from Ali Fujiyoshi ’19 to put the Doors up 3-0. With a few minutes remaining in the game, Andover was able to put away a goal, making the final score 3-1. It was a great team win that wouldn’t have happened without the tremendous enthusiasm and energy of Tori Waterfall ‘19, Ellie Wenners ‘21, Emily Henderson ‘19, Julia Placek ‘20, Brigid Stoll ‘19, Sofi Lopez ‘20, and Lily Steinwold ‘21. The girls varsity field hockey team will be prepare for their next game against Greenwich on Sunday.

Football: Win, 7-0
Deerfield edged out visiting Phillips Andover 7-0 on a wet, muddy Sunday afternoon. After a scoreless 1st quarter, Deerfield was able to take the lead as running back Keegan McHugh ’18 scored from 12-yards out. This touchdown proved to be the deciding score of the game. Despite turning the ball over three times, Deerfield was able to keep the score at 7-0 until the final whistle. The Deerfield secondary, led by cornerbacks Inho Choi ’18 and Parker Luber ‘18, did not allow Andover to complete a pass on the afternoon. Linebackers Will Kolman ‘19 and Matt Pecora ’20 made sure the Andover running attack never broke into the back half of the Deerfield defense. Defensive end Adimora Esonwune ‘18 provided a much needed spark in the second half to seal the victory and give Deerfield their second shutout of the year. Deerfield varsity football heads into a bye week to prepare for their final regular season game of the season as they host Choate on November 11th at 1:15pm.

Girls Cross Country: Win, 25-32
The girls varsity cross country team is on their way to an undefeated season as they managed to squeak out a victory against an amazingly deep Phillips Andover Academy, winning 25-32 in the varsity, but being defeated by Andover’s JV. The girls took it to Andover right from the gun, launching themselves out into the driving rain and sopping wet grass course. The conditions proved less than optimal as all runners were roughly 30 seconds off their times from last week, but some amazing performances were delivered, including a transcending step up to the core of the varsity for Esme Benjamin ‘20. The girls stepping up to brave the deluge included: Victoria Patterson ‘20, Noelle Abeyta ‘21, Erin Hudson ‘18, Helen Downes ‘18, Sarah Jane O’Connor ‘18, Esme Benjamin ‘20, Nora Markey ‘18, Erin Howe ‘20, Sofie Sintes, Nailah Barnes ‘18, Acy Cai ‘20, Nafi Sail ‘20, Jasmine Ramos ‘20, Annau Fu ‘20, and Jerilyn Zheng ‘19. The girls varsity cross country team closes out the regular season this coming Saturday when crosstown rival NMH takes their show on the road, joined by the St. Paul’s School, with both seeking to dethrone an undefeated Deerfield.

Girls Varsity Soccer: Tie, 0-0
On a slippery and wet day, the girls varsity soccer team gave it their all on Sunday, tying a good Andover team by a score of 0-0. Throughout the entire 80 minutes, DA ran hard and challenged every ball. Playing on turf, the girls adjusted well to the new surface, weighting their passes just right to connect to player’s feet. A special shout out goes to 9th grader center back Emma Visnapuu ’21 who heroically cleared the ball off the goal line, saving an Andover goal and keeping the game scoreless. Despite some DA offensive opportunities late in the game, the game remained scoreless when the final whistle blew. The team is back in action on Wednesday, as they host Suffield Academy at 3:00pm

Boys Varsity Soccer: Tie, 0-0
Playing on a wet and muddy grass field, the boys soccer team played a good Andover team to a scoreless 0-0 tie. This result was the team’s first tie of the season, moving them to a 5-8-1 overall record. The boys varsity soccer team is in the final stretch of their season with only four games left. The team will travel to Wilbraham on Wednesday, November 1st for a 3:00pm game and will close out their season on November 11th at 12:00pm at home versus Choate.

JV Volleyball: Win, 3-1
The JV volleyball team improves their record to 5-5- on the season with their win over Andover on Sunday. The team only has four matches left in their season, concluding with their Choate match at 10:00AM on November 11th. JV volleyball will be back on the court on Wednesday as they travel to Stoneleigh for a 3:00pm match.

Boys JV Soccer: Win, 2-1
The boys JV soccer team was able to record a win on Sunday over Andover by a score of 2-1. With the victory, the team improves to 7-2-3 on the season. The team has had a very powerful offense this year as they’ve outscored opponents 31-9 through their 12 games. The team hopes to improve on their record from last year when they went 9-2-4 by winning their remaining four games on their schedule.

Despite the rainy weather, DA teams were able to work hard and come up with some big results on the day. With only two weeks left in the fall season, we want to wish good luck to all teams as they finish up their regular season schedules.