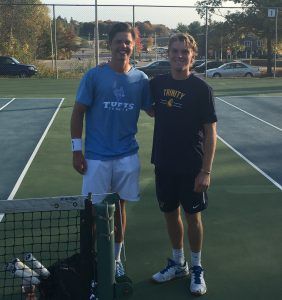 This past weekend at the 2017 Wallach Invitational at Bates College, two Deerfield alumni were reunited on the tennis court. Carl Grant ’17 and Scott Danforth ’17, who served as the captains of the boys varsity tennis team last year, are now both playing collegiate tennis in the New England Small College Athletic Conference (NESCAC).

Grant, a native of Oslo, Norway, is a first-year at Tufts University and a member of their men’s tennis team. This fall, Grant has had a smooth transition into collegiate tennis. In his debut, he reached the doubles B flight final at the 2017 Middlebury Invitational on September 23rd and 24th. Then, at the MIT Invitational on October 13th and 14th, he had an opening round win in the Doubles Main draw and got his first collegiate singles win in the back draw. Most recently, at the Wallach Invitational this past weekend, Grant brought home his first piece of hardware as he won the singles D flight with five consecutive victories in straight sets. At Deerfield, Grant was on was on the tennis, skiing and squash teams. He served as co-captain of the boys varsity tennis team his senior year with fellow classmate Scott Danforth ’17.

Danforth, a Greenwich, Connecticut native, is a first-year student at Trinity College. He is a member of the men’s tennis team and also recently competed at the Wallach Invitational hosted at Bates College. Danforth earned his first collegiate victory on Saturday in the singles D flight as he defeated his opponent from Brandeis 6-2, 7-6 (3). At Deerfield, Danforth was a four year member of the boys varsity tennis team and served as team captain his junior and senior years. As a senior, he was awarded the James L. Ford Deerfield Tennis Trophy, which is presented every year to Deerfield’s most outstanding male tennis player.

With the fall portion of the NESCAC tennis season coming to end, Grant and Danforth will both look to train hard in the offseason to prepare for the spring season starting in March 2018.

Good luck with the rest of your freshmen seasons, Carl and Scott!