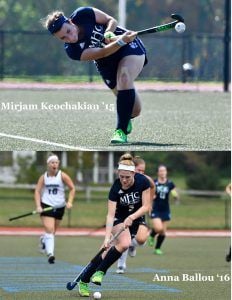 After playing together for two seasons on the Deerfield Varsity Field Hockey team, Mirjam Keochakian ’15 and Anna Ballou ’16 reunited as teammates once again on the Mount Holyoke Field Hockey team. Mirjam, a junior, and Anna, a sophomore, have both been major contributors for the 10-4 Lyons, each starting every one of the Lyons 14 games this season.

Since her arrival on campus as a freshman in 2015, Keochakian, a midfielder, had an immediate impact on the team, playing in 20 games and starting 18. Her success continued in her sophomore year as she started all 19 games and finished second on the team in goals, assists, points and shots. This year as a junior, Keochakian is leading a high powered Mount Holyoke offense, which has recorded 41 goals in 14 games. Currently, Keochakian is first on the team in assists (6), second for goals (7) and second for points (20). In Mount Holyoke’s game against Clark University on September 16th, Keochakian scored a hat trick in their 6-1 win. Keochakian, a native of Hamburg, Germany, was a two-year member of the varsity field hockey team at Deerfield.

Ballou, who joined the Mount Holyoke team a year after Keochakian in 2016, also became a major asset for the team on defense as a freshman. In her first season, she started 18 games and helped hold opponents to a 1.56 goals against average. She also added a goal and three assists during her freshman campaign. This year as a sophomore, Ballou has already recorded four goals and three assists, with her most recent points coming off a goal and assist in the Lyons 4-3 win over Western New England University on Tuesday, October 18th. At Deerfield, Ballou was a four-year member of the Deerfield varsity field hockey team and was a starter on the team for three of those years.

With an overall record of 10-4 and only three games left in the regular season, the Mount Holyoke Lyons look poised to make a deep run into the NEWMAC tournament, hoping to improve upon their semifinal loss to Babson last year.

Keep up the great work Mirjam and Anna!