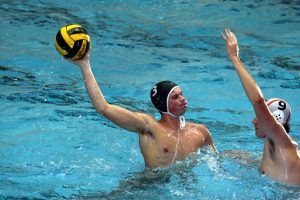 It was a good day in the pool yesterday as boys varsity water polo defeated Choate 16-6. The game was livestreamed for fans who could not make it to campus.

At the end of the 1st quarter, Deerfield led Choate by only one goal. However, in the 2nd quarter, the Big Green pulled away with some high powered offense and four unanswered goals to make the score 7-2 at the end of the quarter. DA continued their offensive success in the 3rd quarter, adding six goals and only conceding one. The final quarter featured more even matched play with each team scoring three goals. When the final whistle blew, Deerfield was victorious, improving their overall record to 5-3 on the season.

Stand out performers from the Big Green include senior co-captain Andrew Penner ’18, who scored eight goals, and his fellow classmate and co-captain Nolen Rockefeller ’18, who was good for four scores. Henry Lowe ‘19 also added to the offense with four goals of his own. On the defensive side, goalie Graham O’Brien ’19 held strong in net with 10 saves.

This was Deerfield’s second game and second win over Choate this season. The Big Green also defeated Choate on the road by a score of 12-7 on September 16th.

The team will look to carry this momentum into the weekend as they travel to the Hopkins School in New Haven, CT on Saturday for a 3:30pm game.