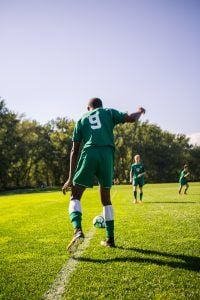 Under the lights in front of a large St. Paul’s crowd, the Deerfield Boys Varsity Soccer team were able to pull off a 4-2 come from behind road win on Saturday night in Concord, New Hampshire.

Deerfield went down 1-0 early in the first half off a long distance strike from St. Paul’s forward, Salman Alireza ‘18. However, the Deerfield defense, led by post graduate goalkeeper, Pat Logan ’18, was able to regroup and stand tall the rest of the first half, escaping only one goal down despite St. Paul’s numerous offensive chances.

The second half was a very different story as DA came out strong from the get go. Post graduate forward, Cabrel Happi Kamseu ’18, had an exceptional game tailing three back-to-back goals to earn a hat trick. Having lost the lead, St. Paul’s was able to regain their composure and answer back with a goal of their own off a header from forward Sam Pratt ’18 that found the back of the net.

With Deerfield leading by a close score of 3-2 in the final twenty minutes of the game, both teams dug in to try to claim the victory. It was junior forward Nolan Zusi ’19 who stepped up to score the game winner off of a served cross in the box from a DA teammate. With time running out, this goal sealed the victory for Deerfield as the final score finished 4-2.

The Deerfield Boys Varsity Soccer team will look to carry the momentum from this big win into their game on Wednesday as they play host to Westminster for a 3:00pm game.