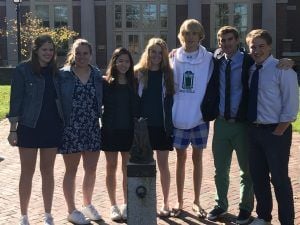 Jack “Vern” Trapp is the JV Football team’s first, ever, Athlete of the Week. Against Williston, he recorded 12 tackles (3 for a loss), recovered a fumble for a TD, intercepted a pass that ended 1-yard short of the end-zone and had one punt return. It may have been the greatest defensive performance in JV Football history. Congrats, Jack!

The Boys Junior B Soccer co-athlete of the week are Willy Conzelman and John O’Loughlin. Willy volunteered to play goal to help the team out, even though he had never played before. He responded with several great saves in the team’s 4-1 win against Bement on 10/11. The next game against Eaglebrook, John also volunteered to play keeper, despite never having played the position before. He made numerous spectacular saves and showed a good instinct for the position. Thanks to his efforts, Deerfield held EBS scoreless for 64 minutes in an eventual 2-0 loss.

Varsity field hockey has named Meaghan O’Brien ‘18 and Tierney Roche ‘18 our co-players of the week. Meaghan and Tierney are the captains of this year’s squad, and their leadership has proved invaluable to the team’s success this season. After a tough loss at St. Paul’s, Meaghan and Tierney were able to bring the team together and inject a renewed sense of spirit and unity into the group. They led by example in both games this week with their strong play and consistent communication. The work that these two captains have done so far bodes well for our team as we tackle a challenging second half of our season. We thank them for their dedication to their teammates and look forward to their continued leadership and strong play. Congrats Meaghan and Tierney!

Erin Hudson immediately took the lead in our race Saturday against Loomis and Choate, setting a torrid pace and passing through the mile in a remarkably fast 5:40. Not long after, she began to show the effects of both the fast pace and heat of the day, trailing off Deerfield’s top two harriers and being hunted down by Choate’s top runner. At a point just before two miles, when most people would have given in, Erin steeled herself in a valiant effort to hold off the Choate girl. By the time the pair made the drop down into the final 500 meters of the race, Erin had clearly made up her mind that she would get the best of her nemesis of the first 4,500m; and best her she did. Erin kicked it into another gear and gapped the Choate girl just before the final drop downhill. Then, across the last field, Hudson not only held her ground, but managed to increase her lead and finish in a season’s best time. For all these reasons, Erin Hudson is the Deerfield Girls’ Cross Country Athlete of the Week!

Connor Guest is the Boys Junior A athlete of the week for his offensive efforts in their games against Suffield and Hotchkiss. In the team’s game at Suffield, Connor had numerous final third chances and eventually scored a goal in the 4-0 win. Just days later, Connor helped Deerfield defeat Hotchkiss, handing them their first loss of the season. In the contest, Connor led the offense with a goal and an assist in the 3-1 victory. Congrats, Connor!

Claire is a player who gives 100%. She is always making the extra effort. During last week’s game against NMH, Claire impressed her coaches and her teammates with her athletic ability. She dove for balls over and over again, creating second chances and saving plays that may have otherwise meant a point for the other team. It seemed at times that Claire was on the ground more than standing in this game and her efforts are truly appreciated. In addition to having incredible commitment, Claire is also a positive presence on the court. She has fun playing and that is infectious.

The boys’ XC athlete of the week is Charlie Lewis ’21. Charlie ran a lifetime-best time in the race against Loomis and Choate on Saturday, combining a fast first mile with a vicious kick over the last half-mile to finish as Deerfield’s third runner on the day. Congrats, Charlie!

Hannah Valencia is the girls varsity soccer athlete of the week. Hannah has been a welcomed addition to the girls varsity soccer team this season. She is a tenacious defender and phenomenal athlete. All season long she has been tested against our opponents’ best players but Hannah has consistently risen to the challenge, neutralizing the other team’s attack with her 1v1 defending and great work rate. During the course of the season she has been challenged by the coaches to also contribute to our attack and game-by-game Hannah is not only fulfilling her defensive responsibility, but also working tirelessly to join in the team’s attack. Hannah always brings a positive outlook and offers a supportive smile to her teammates. Thank you, Hannah!

Abby Bracken is varsity volleyball’s athlete of the week. Abby continues to “release the Bracken” this season, giving her all in each match. We celebrate Abby this week for her effort and consistent play at NMH. She just seemed to always be in the right spot during that match! Making a play on every ball that came in her direction. Abby loves the game of volleyball, and she shows it every time she touches the court. Thank you for your consistency and positive vibes Abby. Keep it up!