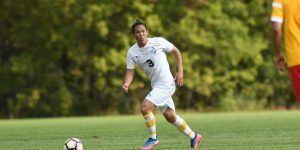 On Tuesday, October 24th, the Carleton College men’s soccer team clinched a playoff berth in the Minnesota Intercollegiate Athletic Conference (MIAC) for the 11th consecutive season. The team, led by senior captain Stephen Baisch ’14, played to a 0-0 (2OT) tie against Saint Mary’s University to solidify a spot in the upcoming MIAC tournament. The Knights will open the MIAC Playoffs on the road with a quarterfinal match on Oct. 31 against an opponent still to be determined.

The game versus Saint Mary’s also featured a celebration of the graduating seniors in their final regular-season home game. Baisch, a Williamstown, Massachusetts native, has been a four year member of the Carleton men’s soccer team, serving as captain his senior season. As a freshman, Baisch made an immediate impact on the team, playing and starting in all 18 games, and adding an assist on the year. As a sophomore, he continued his success, playing and started in all 19 games. As a junior, Baisch saw action in 14 games, starting 13. This season, as a senior, Baisch has started 12 of 12 games and scored one goal in an overtime loss to Simpson Collage on September 9th. He has also been a part of a stellar Carleton defensive unit that has gone 498 consecutive minutes across six games without conceding a goal. On the season, the defense has recorded 11 shutouts, the most in the MIAC.

On the day, head coach Bob Carlson praised Baisch’s play. “Stephen simply worked himself to the point of exhaustion and then kept giving more and willing us forward. His determination, grit and talent out wide created countless chances, and he fought relentlessly defensively.”

At Deerfield, Baisch was a four year member of the boys varsity soccer team and served as captain his senior year. Baisch and his Carleton teammates will finish up their MIAC regular season games with a 12 p.m. match on Saturday, October 28th at Saint John’s.