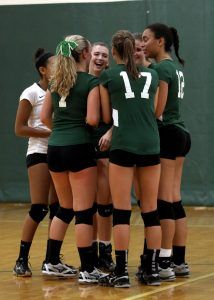 After three matches, the Deerfield Varsity Volleyball team remains a perfect 3-0. Last Saturday, the team kicked off the season with a tri-match against Milton and Miss Porter’s. Deerfield went up against the Mustangs of Milton first. The first set became a game of serving, with Deerfield scoring a number of aces, allowing them to win the first set. The second set was much closer. Near the end of the set, the Big Green trailed 24-22. However, Deerfield’s senior captain Kiana Rawji ’18 stepped up to serve and calmly brought DA back for a 26-24 set win. With all the momentum in Deerfield’s favor, the team won the third set 25-9, a season opening victory.

Later in the day on Saturday, Deerfield put up a full team effort against Miss Porter’s. A very skilled team, Miss Porter’s took the first set in a hard-fought battle. After the first set loss, DA answered back strong in the second set jumping out to a 8-1 lead. The Big Green was able to hold onto this lead and win the second set. In the third set, Miss Porter’s came back with some strong blocking allowing them to take the set. A hard fought fourth set left the match tied at 2-2, leading to a decisive fifth set. The fifth set again saw Deerfield push ahead early, with great work by outside hitters, Georgia Quesnelle ’19 and Camila Navarro ’20, who had been strong for the Big Green all day. Deerfield never let down and was able to finish up strong to win the long match. Kiana Rawji ’18 and Rosa Sun ’21 were consistently strong and helped lead the team throughout the two matches.

On Wednesday, the team continued their success from Saturday as they defeated Worcester 3-0. DA came charging off the blocks in the first set. They quickly tallied a first set win rotating only three times through with strong serves from Kiana Rawji ‘18, Georgia Quesnelle ‘19, Melissa Mitrovic ’19 and Imani Kindness-Coleman ’18. The second set saw some new faces on the court for the Big Green. After being down 9-4, the team was able to come back and win the set with a close score of 26-24. The final set mirrored the first, with the Big Green’s consistent serves, passes, and hits leading to a Deerfield win.

With three wins in three matches this season, the Deerfield Varsity Volleyball team is poised and ready to continuing their win streak this Saturday when they travel to Choate to play Sacred Heart, Lawrenceville, and Pomfret in the Choate Quint.