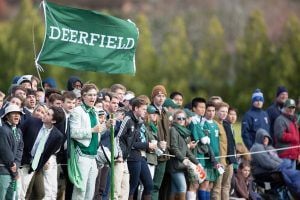 It was a successful opening weekend for Deerfield teams as they went 6-1-1 overall and had great showings from both the boys and girls cross country teams. The day started off with Deerfield’s 8th annual Brush Invitational.

In the 11th and 12th grade race, Will McNamara, one of Deerfield’s captains, finished 3rd overall and made it clear that he will be a dangerous runner in New England this fall. JJ Siritantikorn was Deerfield’s second upperclass finisher, capturing 6th place in a very strong season debut. Deerfield’s other captain, Marco Marsans, was only three seconds behind in 7th. Tom Dillon returned to racing for Deerfield in fine fashion, too, finishing in 14th overall. Two upperclassmen finished their first races for Deerfield: Vanja Obradovic (18th overall) and Ian Gordon (20th overall).

Girls varsity volleyball starts their season 2-0 after wins on Saturday over Milton and Miss Porter’s. In the first match, Deerfield defeated Milton Academy 3-0. Later in the day Deerfield put up a full team effort against Miss Porter’s, a very skilled team. The match came down to a decisive fifth set. Deerfield jumped ahead early, with great work by outside hitters Georgia Quesnelle ’19 and Camila Navarro ’20, who had been strong for the Big Green all day. Capitalizing on their early led, Deerfield was able to finished up strong and win the long, tiring match. Standout performances include Kiana Rawji ’18 and Rosa Sun ’21, who were consistently strong throughout the two matches. The girls varsity volleyball team will look to build on these two wins in their next match against Worcester on Wednesday.

Opening their season on the road, the girls varsity field hockey team beat Berkshire 1-0. Throughout the game, Deerfield worked the ball together well, finding each other’s quick passes and intercepting many of their opponents’. The lone goal of the game was scored by Ali Fujiyoshi ’19 off a corner play. While the Big Green fired another 19 shots on goal before the game was over, the score remained a tight 1 – 0 at the game’s conclusion. There was some exciting play by two new first year players, Hannah Roche ’21 and Talbot von Stade ‘21, and some great work by girls who were in brand new positions. Next up, Deerfield will face Pomfret on Wednesday in Connecticut.

To open their season, the boys varsity water polo team participated in the Choate Quad on Saturday. After a loss to Brunswick in their opening match, Deerfield was able to bounce back and defeat Choate 12-7. Goals came from Nolan Rockerfeller ’18, Andrew Penner ‘18 and Kevin Gu ‘18. Other great performances included goalkeeper Graham O’Brien ’19, who finished the game with 10 saves. Deerfield will be back in action on Wednesday as they travel to Loomis for a 3:15pm game.

On Saturday, the boys varsity football traveled down to New Jersey to reignite a longstanding prep school football rivalry with the Lawrenceville School. The two teams met for the first time since 1993. However, before that the two schools played each other for 22-straight seasons. In this contest, Deerfield edged Lawrenceville 23-6 to go 1-0 in the early season.

Deerfield’s defense was lights out on the day keeping Lawrenceville out of the end zone for a majority of the game. Seniors Kvietkus ’18, Choi ’18, and Byrd ’18 led the way and set the tone for DA. Freshman Bennett Pitcher ’21 was also able to do some great work from his defensive end spot adding a few sacks and a forced fumble.

On the offensive side of the ball, Deerfield was able to get some great effort and touchdowns from Choi ’18, McHugh ’18, and Bevino ’18. Deerfield QB Jack Bill ’19 threw all 3 touchdown passes on the day. The offensive line McCarty ’19, Bogle ’19, Kvietkus ’18, Savage ’20, and Stevens ‘18 moved the pile and allowed McHugh ’18 to rush for close to 100 yards on the day. Dwinnell ’18 and Bonnie ’20 chipped in solid efforts as well. Deerfield heads down to Suffield Academy on Saturday this week to battle with another strong opponent.

In an excited game, the Deerfield girls soccer team completed a 3-goal comeback to tie Milton Academy in their season opener. After falling behind 3-0, the Big Green came alive in the last 25 minutes of the game when Brenna Hoar ’18 dropped a beautiful service into the Milton’s 18-yard box that Annabel Gerber ’20 put it in the net to make the score 3-1. A few minutes later, Hoar ’18 struck with a goal of her own off another free kick from just outside the center of the 18-yard box. In the final minutes of the game, Hoar ’18 scored her second goal of the game from a long distance shot to complete the comeback. With a final score of 3-3, Deerfield was very pleased with their second half effort and will look to build on it for Wednesday’s game as the team hosts Westminster at 3 p.m.