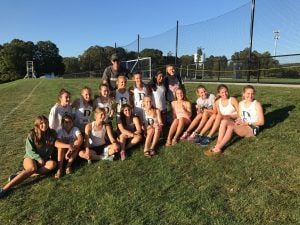 On a hot and sunny day, Deerfield traveled to the Canterbury School in New Milford, Connecticut, on Saturday, 9/23, for the 45th running of the Canterbury Invitational. In their first team meet of the season, both the Deerfield girls and boys cross country teams had impressive showings. The girls finished 1st overall and the boys took home 3rd overall.

Deerfield runners look forward to this meet every season because of the host school’s wonderful hospitality, the challenging course, and the tough early season competition. This year’s edition was no exception.

The girls were able to return to the top spot on the podium this year at the 45th running of the Canterbury Invitational, finishing first among eleven teams, including rivals Hotchkiss, Loomis, and Taft. With temperatures reaching into the upper eighties and low nineties, and with the compounding factor of the already substantially challenging hilly course, the girls rose to the occasion, paid significant dues over the 5 km course, and came home with some substantial hardware.

The team was led by sophomore Victoria Patterson who won the girls division I race, finishing with a time of 19:31. Right on Victoria’s heels were 9th grader Noelle Abeyta (19:52) in 3rd, senior Erin Hudson (21:01) followed in 6th, senior Helen Downes (21:19) in 8th, junior newcomer Bailyn Prichett (21:52) 12th, and rounding out the squad was senior Sarah Jane O’Connor (22:25), finishing in 16th. This was the most significant display of dominance at the invite in memory, and portends great things to come.

Indeed, the girls were dominant right from the gun, with a wave of big white D’s taking the vanguard by the 200m mark. There were certainly bumps in the road, with the steep hills (up and down) taking their tolls both physiologically and psychologically. Added to the challenge of terrain were the heat and the early-in-the-season timing of the meet, but the girls escaped unscathed and ready to take on all comers at the Westminster Invitational this coming Saturday.

The Deerfield Boy’s cross country team captured third place for the second consecutive year, finishing behind Hotchkiss and Loomis Chaffee. Despite the unseasonably high temperatures, all the Big Green runners turned in solid performances and executed their race plans with discipline and focus.

Will McNamara ’18 and Ricardo Gonzalez ’19 ran together at the front of Deerfield’s pack for the first two miles, chasing a very quick lead pack over the hot, hilly Canterbury course. McNamara pulled away from his teammate on the final hill, ultimately finishing first for Deerfield in 9th place overall, his second consecutive top-ten finish at Canterbury. Gonzalez was close on his heels in 13th place, followed by his classmate J.J. Siritantikorn in 15th. Siritantikorn turned in his best career race, breaking his PR on the Canterbury course by more than 30 seconds. Marco Marsans ’18 (18th) and Declan Cullinane ’21 (22nd) rounded out the scoring five for Deerfield. Jake Meier ’20 completed his first 5K for the Big Green, running a smart, disciplined race to capture 28th overall, and his veteran teammate Tom Dillon ’18 ran a big season’s best time to earn 30th place.

Next Saturday, both Deerfield girls and boys cross country teams will travel to the Westminster School in Simsbury, Connecticut, for the Richard Miller Invitational. This meet offers both Varsity and Junior Varsity races, so the entire team will be back in action for one more big meet before kicking off the dual meet season at St. Paul’s School on October 7th.

Complete results from the Canterbury Invitational can be found here.